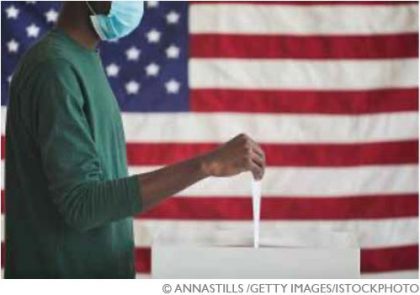 On Thursday, April 14, the Unitarian Universalist Association (UUA) launched its UU the Vote initiative
for the 2022 elections. UU the Vote is a nonpartisan civic engagement initiative focused on strengthening democracy and organizing for justice, accountability, and healing.

On Sunday, April 10th, UUA President Rev. Dr. Susan Frederick-Gray, Unitarian Universalist (UU) congregations from across the country, and partner organizations launched the effort at a virtual event (Vimeo). “A commitment to democracy is central to our faith tradition and it is also central to our society. It
is a principle that recognizes that every voice matters and is needed,” said President Frederick-Gray.

The UUA successfully conducted its first UU the Vote initiative in 2020. More than 450 UU congregations and more than 5,000 volunteers participated in voter mobilization, get out the vote, and election defense efforts in all 50 states during the presidential election year.

Volunteers sent more than a million postcards and held more than 350 UU the Vote events in 35 states. UU the Vote also co-hosted phone banks with partners in key states, including Arizona, Florida, Michigan,
North Carolina, Ohio, Pennsylvania, and Wisconsin. UU the Vote volunteers contacted more than 3 million voters, including outreach to more than 148,000 voters in Michigan, 45,000 voters in Pennsylvania, and 36,000 voters in Nevada. “There is much at stake in the 2022 elections – and not just at the federal level.. There are a number of ballot initiatives across the country that will have long-term implications for reproductive justice, voting rights, direct democracy, labor rights, education, health care, and more.” said Rev. Ashley Horan, Organizing Strategy Director for the Unitarian Universalist Association.

The brand-new campaign manager for the 2022 UU the Vote campaign, JaZahn Hicks, tells us that UUs are getting ready “To raise our voices and act on our values to strengthen democracy by fighting for fair elections, advancing voting rights, protecting abortion access, and resisting the targeting  and criminalization of Black, Indigenous, and people of color communities as well as LGBTQIA+ individuals, especially trans
and nonbinary people.” For the latest updates and news from UU the Vote, sign up here:
Learn more about UU the Vote.