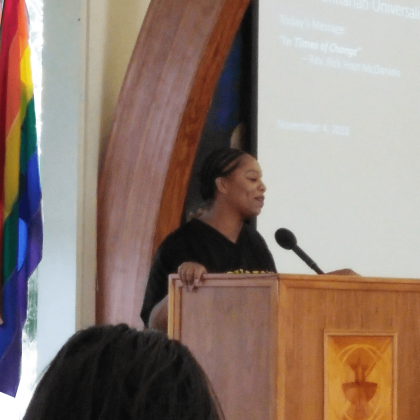 This Sunday, Patrisse Cullors, co-founder of Black Lives Matter, urged the congregation to vote in this election, because voting matters. Do your research on the candidates and issues she urged, not just at the top of the ticket, but also the many local candidates and propositions. Look to people who share your values for their guidance. Patrisse directed people to Jasmyne Cannick’s (the Executive Director of Reform LA County Jails) recommendations for the judges. The ACLU was another trusted source whose recommendations she values.

Patrisse noted that many folks do not realize we elect the LA County Sheriff and the Sheriff has broad authority. The Sheriff oversees security for the courts and police service for many small city and unincorporated parts of the county and operates eight county jails. Ms. Cullors launched Reform LA County Jails, and last month representative of Reform LA Jails spoke to us about the unaccountable and unlawful practices in those jails by Sheriff’s deputies. Who is Sheriff makes a difference is what happens in the jails. She urged us to do our research and vote.