Racial justice. Now is the time (and past time) to address inequities in ourselves and our institutions.

Will adopting an 8th Principle solve anything?

This question does not have a simple yes or no answer. The 8th Principle is one of the tools we hope to add to our spiritual toolbox. That’s why we (the 8th Principle Task Force) are inviting all members/friends of the congregation into conversation about ways to dismantle white supremacy and to promote racial justice, equity, and inclusion. 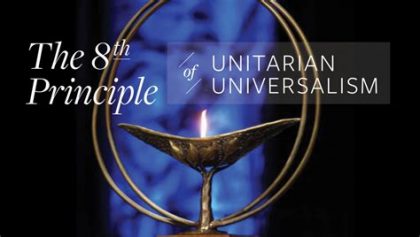 Our next step as a congregation is to hear and respond to the call from Black Lives UU to adopt the 8th Principle.

What exactly does the 8th Principle say?

If you need a refresher on the current 7 Principles of Unitarian Universalism, they’re here.

The proposed 8th Principle, which has already been adopted by some congregations, states:

We, the member congregations of the Unitarian Universalist Association, covenant to affirm and promote: journeying toward spiritual wholeness by working to build a diverse multicultural Beloved Community by our actions that accountably dismantle racism and other oppressions in ourselves and our institutions.

In April of 2017 The Black Lives of Unitarian Universalist issued the following: The Black Lives of UU (BLUU) Organizing Collective encourages all Unitarian Universalists to advocate for the formal adoption of an 8th principle, articulating a commitment to the dismantling of white supremacy, within the stated principles of our faith. The proposed 8th Principle was written by Bruce Pollack-Johnson and Paula Cole Jones. Since 2013, some Unitarian Universalists residing in the former Joseph Priestley District (now part of the Central East Region) have been advocating for the adoption of an 8th principle within the faith. In the same year, this matter was presented at the General Assembly Planning Committee retreat by Paula Cole Jones and later discussed by the members of the Council for Cross Cultural Engagement.

See also the full article from BLUU at Medium.

Why do we need the 8th Principle? 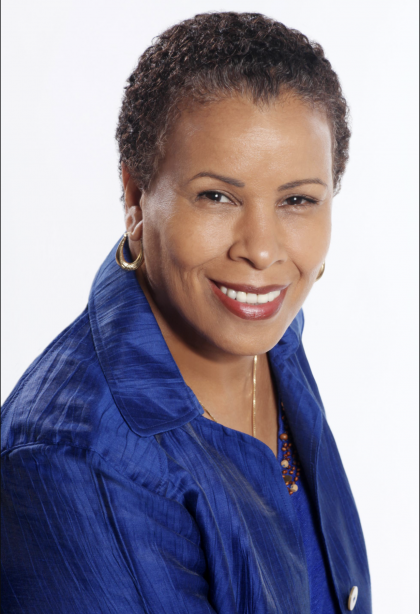 Paula Cole Jones, Past Regional Director of Racial & Social Justice, developed the idea of the existence of 2 different paradigms in UU circles: the UU 7 Principles and Beloved Community (deep multiculturalism). After working with congregations on these issues for over 15 years, she realized that a person can believe they are being a “good UU” and following the 7 Principles without thinking about or dealing with racism and other oppressions at the systemic level.

She realized that an 8th Principle was needed to correct this and talked with Bruce Pollack-Johnson about some of the components that should be in it. Bruce put together an initial draft in 2013, and the two of them worked with a group of anti-racist activists in the their UU district to refine it. Bruce’s congregation (the UU Church of the Restoration in Philadelphia) incorporated it into their Covenant at that time, then in May 2017 formally adopted it for themselves and recommended that the UUA adopt it.

UU funding and focus in the last decade [has] shifted toward shallow diversity rather than deep multicultural Beloved Community and structural change. UU support of the Movement for Black Lives has been encouraging; the best way for us to truly support racial justice in a significant way is to purge ourselves and our institutions of the culture and exclusive practices of whiteness and white supremacy.

The New Jim Crow (mass incarceration and the criminal justice system replacing the older systems of slavery and Jim Crow laws), police violence against people of color, recent Supreme Court decisions on Voting Rights and Affirmative Action, and Donald Trump with advisors and followers openly supporting white supremacists show that the country is moving quickly and dangerously in the wrong direction. UUs need to take strong leadership to reverse these trends. Please explore the full contents and links of these excerpts at 8th Principle UU.