Our congregation was a founding member of the Greater Long Beach Interfaith Community Organization (ICO) in 1999, and we have a proud history of working with other faith communities (such as First Congregational UCC, Second Samoan UCC, St. Athanasius Catholic, St. Lucy’s Catholic, St. Luke’s Episcopal, United With Hope UMC) and other supporters in Long Beach to increase justice for all residents of the Greater Long Beach area.

ICO has recently merged with LA Voice and we are in the midst of training a team to conduct a 1:1 Listening Campaign at UUCLB.  Other member LA Voice congregations and organizations across LA County and other federations across the State of CA associated PICO CA are doing the same.

In the past two decades, with our partner congregations we have addressed myriad local concerns, including traffic problems, street lighting, crime, sanitation and youth activities. We have collaborated on improving air quality, access to health care, shelter for the homeless, the need for affordable housing, and immigration concerns. 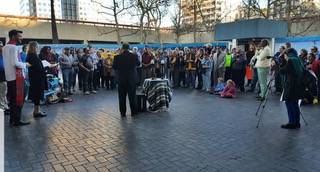 An early major victory, spearheaded by our congregation, created the first year-round homeless shelter in the City of Long Beach. In a more recent campaign, we collaborated with our ICO partners and many others across the State of California to pass Proposition 47, which reduces the penalties for certain low-level felonies, and to establish programs that encourage people to exercise their new rights to have criminal records reclassified. In 2018, with ICO’s leadership, members of our congregation collaborated with people from congregations in Orange County to present a candidates forum for the 48th Congressional District mid-term election.

LA Voice frequently partners with other community groups to work on social justice, becoming part of broader efforts of statewide and even national concern.

Like the other congregations in LA Voice, we have a Local Organizing Committee (LOC) that identifies key issues within the congregation and then works toward solutions, typically in partnership with LA Voice member congregations and organizations.

Everyone is invited to attend meetings of UUCLB’s LA Voice LOC, either to observe or to become involved. Attending the meetings is an excellent way to find out what issues are of concern in the greater community, and what other organizations are doing to address the issues.  Click here to find out more about the LOC.

Faith in Action, formerly PICO (LA Voice is a member)