Home » About Us » Minister’s Message

Though our chalice changes, the flame burns bright. 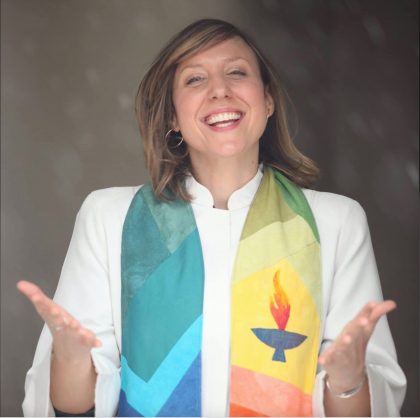 Our flaming chalice is perhaps the most well-known symbol of our Unitarian Universalist faith. A beacon that illuminates our values and vision for our lives and for our world. A spark of divine light within every person, which is in constant need of rekindling. At times, the light within us can at times burn clear and strong, and in other times, it can flicker, and go out.

In our first year of ministry, I spent a lot of time with our chalice, alone on Sunday mornings as I preached to you from Wylder Hall. This beautiful symbol greeted me and beckoned to me, I felt its presence and steadiness as a beacon in our times of distance, and I wanted to learn more about it.

At times, the light within us can at times burn clear and strong, and in other times, it can flicker, and go out.

Our chalice was originally created by the artist Mordecai Roth, with an inscription date of 1997. I felt drawn to Mordecai’s story, and learned about the legacy our guest Paul Byerley is carrying on through his beautiful chalice creations. I reached out to Paul, who is living in Temecula, and was delighted to connect with him. In addition to his full time job in the medical business, Paul manages Part One Fine Arts which makes and sells several versions of the chalice, including the Tree of Life chalice we dedicated on Sunday, September 19th. Paul is stepson of the sculptor Mordecai Roth.

Mordecai was commissioned by a fellow member of the UU congregation of Surprise, AZ. Upon completion of the original work, Mordecai was asked if he could make additional examples for others. He made a classic chalice originally followed by the Tree of Life Chalice. The Tree of Life quickly became his most popular chalice and is now lit every year at the UU General Assembly.

Mordecai continued to build and sell chalices until his passing in 2013. After Mordecai passed, Paul stepped in to help fill the continued demand for Mordecai’s chalices. Mordecai’s iconic Tree of Life chalice has traveled to Unitarian Universalist congregations around the world, and is the most visible religious symbol which unites thousands of Unitarian Universalists each year. As it turned out, there was just ONE original Tree of Life chalice left in Roth’s family archives, which happened to be the original chalice forged for the Surprise, Arizona congregation and enjoyed in their worship use for many years. It took awhile for Paul to decide if he was ready to part with this incredible piece, but upon hearing our UUCLB story he knew that it would have a wonderful home with us. With the generous funds that would have gone towards in-person travel and participation in last June’s General Assembly, I was able to purchase this beautiful new chalice from Paul as a gift to the congregation.

We blessed the new chalice and released our old chalice to serve our congregation’s emerging worship and gathering needs.

Chalice Dedication Words:
We light this chalice.
To signify a bold new chapter of our ministry
To unite us in common worship and purpose,
To join together online and in person congregation
To illuminate a new path of possibility and promise
To rededicate ourselves to the spirit of sacrifice, resilience and commitment.
As we light this flame, may this symbol of our highest values bind us to the great cloud of witnesses whose legacy of love blesses us still,
May it be a steady and constant witness to the unfolding of our lives,
In times of celebration and mourning,
May it fortify us, strengthen us, and encourage us,
Amen, and blessed be.